I’ve mostly spent this week tuning and fixing bugs in the features that I discussed last week, so rather than go into detail about what I’ve been working on, I thought I’d share some of my ideas for Gunmetal Arcadia‘s road to launch.

As I discussed in that game’s postmortem, Super Win was not the success I’d hoped it would be. A few months later, it looks like it might not be a complete failure either, but at best, it’s a slower burn than is sustainable. I theorized a bit in that article why that might be, and I’m taking steps on Gunmetal to make sure this game performs better. Keeping this devlog is the first of those; implicit in that is that I’m also not being so wary of showing the game in early or incomplete states. Between wanting to show representative “final” Super Win content very early (e.g., for the announcement and teaser trailer barely two months after conception) and not wanting to show too much of “the cool stuff” like the dream sequences and final level, I found myself in a state of constantly crunching to meet deadlines that did little to benefit the game’s visibility in the long run.

For Gunmetal, I’m doing an about-face on that attitude. My modus operandi this time has been to show everything, regardless of how broken and unpolished it is, hence all the placeholder art stolen from Zelda 2 and Faxanadu I’ve been putting on display in this devlog. (Happy news: as of today, I’ve replaced all “borrowed” art with original content. Still placeholder, but not so litigious.) 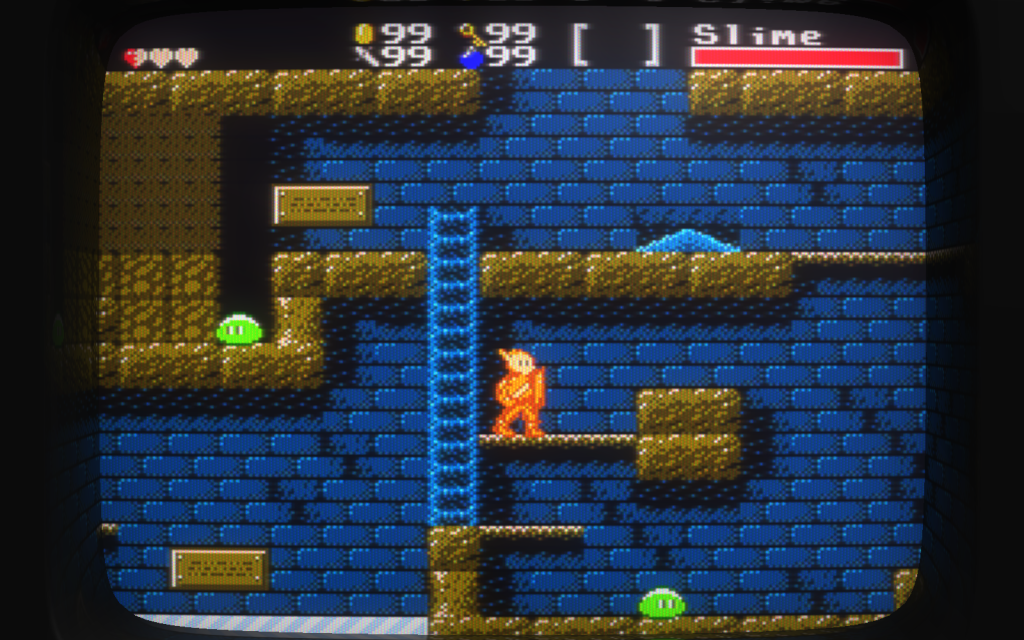 The next step is to start putting the game in players’ hands as early as possible. To that end, I’ll be uploading a short demo soon which will serve to illustrate the current state of core game mechanics. My intent with this demo is to collect feedback related to the feel of these core systems. Does the player move too fast or too slow? Does jumping feel too floaty or too heavy? Does combat feel solid and tactile or papery and insubstantial? Nailing the game feel is absolutely crucial, perhaps moreso than any other single aspect of the gameplay experience, and the longer I wait before gathering and reacting to this feedback, the harder it will be to make changes without inducing unwanted side effects on other parts of the game.

If this is successful, I’d like to continue making these sorts of iterative drops as more high-level systems start coming online. My expectation is that each of these builds would focus on some subsection of the game (e.g., randomized levels, item synergies, and so on), eventually culminating in a more complete, cohesive vertical slice experience.

Looking further down the road, once the game is fully playable and in a position to be polished and tuned, I could turn my attention to pre-release plans. I’ve been debating whether it makes sense to put Gunmetal into Early Access on Steam. My gut reaction to Early Access in the past has been an immediate NUH-UH, but recently I’ve been feeling like it might make sense for Gunmetal due to its roguelike aspects. It will be a while before I can fully commit to that plan; whether it makes sense will depend on a number of factors that won’t be fully visible for some time, and I would want to be careful about properly messaging what that version of the game was (e.g., a nearly complete game, not a partially functional tech demo) and what it wasn’t (e.g., a blank slate awaiting any and all input), but I think it could give me the opportunity to “soft launch” the game in a form that were technically complete and theoretically ready for release but with some extra buffer time built in to respond more aggressively to player feedback, bug reports, and suggestions.

In the meantime, I expect I will be showing Gunmetal Arcadia in some form at events this summer.  I took a playable demo of Super Win to several events last year, including RTX, SGC, and QuakeCon. I’m planning to attend some of these again, and possibly others as well. (I’ll announce dates as soon as anything is confirmed.) Whether I bring a playable build of Gunmetal depends largely on what state the game is in at the time. The worst case scenario is that it’s simply not ready to show and I just demo Super Win again (and maybe also Neon Struct), but at the very least, I should be able to bring a trailer and some promotional materials. I have the advantage this year of being able to fall back on that option, meaning I won’t have to crunch to complete a demo, an experience that I felt was severely harmful to Super Win. I spent the entire dev cycle on that game worrying about development time and crunching towards milestones only to land ahead of schedule and unsure of what to do next. This time I’m just not worrying about that, or really anything else. I know how to make games. I know I work fast. I’m not going to beat myself up over it.