In case you missed it, I wrote up an impromptu Sunday blog with comments enabled to gather feedback on checkpoints and how to handle player state across death and game over. If you have any thoughts on those issues (especially if you’ve played the vertical slice build), please leave a comment!

Last week saw me move from creating tilesets to decorating and populating levels with environment art, enemies, and NPCs. I finished the Basil, Cilantro, and Tarragon levels (levels 3, 6, and 5, respectively), and as Cardamom (level 2) was already completed back in January for the vertical slice build, that leaves only Fennel (1) and Sage (4).

It will still be another week or two before I can really get a sense of the scope of the finished game (just in time to ship it, ha!), but I’m at least getting a better sense of the variety of levels than I could when everything was grayboxed and I just had to imagine how each environment would look.

I don’t usually blog about bugs because they’re not fun to write about and I suspect they aren’t fun to read about, but I ran into one this week that was worth mentioning. The bug manifested as “an NPC walks off screen but a second copy remains and can be interacted with as usual.” The catch was, this only happened when progressing through the game normally; launching directly into the map through the editor worked correctly. 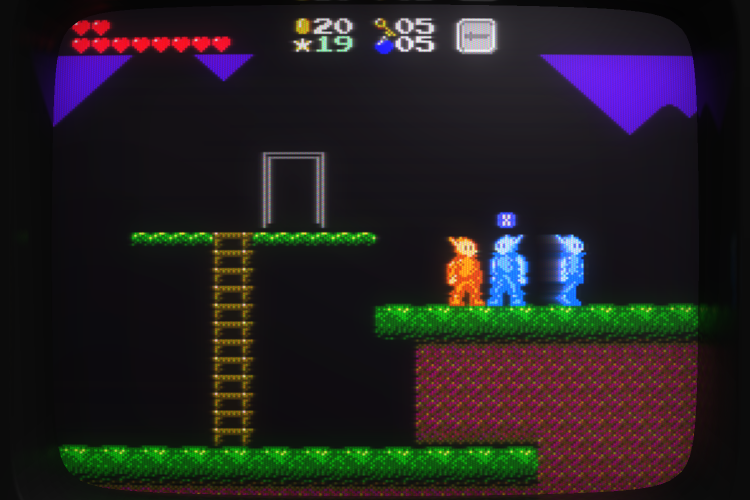 That immediately raised some suspicions of what the level transition code was doing, and, skipping over some boring technical stuff, in short, when reaching the end of a level and transitioning to the next one, the new level would be loaded once, immediately discarded, and then loaded again. And if it weren’t for this odd edge case, I’d have never noticed! The only reason the NPC was appearing twice was because of a side effect related to suppressing entity spawning until the room is fully visible in order to appear more NES-like.

When entering a room, I queue up all the entities in the room for spawning, but I wait to actually spawn them until we’ve finished scrolling or fading in (with the exception of things like teleport exit markers that necessairly must exist earlier). Once the scroll or fade has finished, I spin through the list and spawn the queued entities.

So what was happening here was, I would load the level once, queue up all the things that needed to spawn, including this NPC, then immediately discard the level but not the queued entities. Then I’d load the same level again, queue up the same entities again, and spawn both queued copies once the fade-in had finished.

My first thought once I realized this was, “I guess I should throw out any entities queued for spawning when the level is destroyed.” And in all likelihood, that would’ve fixed the bug, but of course, it overlooked the larger issue of why the level was being loaded twice in the first place. That turned out to be more boring technical stuff. The game has an opportunity to load the incoming level in response to displaying the title card for that level, and in many cases, that is the correct behavior (as when loading a saved game or dying and restarting). However, in some cases, such as starting a new game or transitioning to the next level, other code is better equipped to handle the level load. In this case, I was already loading the next level as soon as possible in response to the previous level fading out, but I had forgotten to opt out of letting the title card also attempt to load it. So, both were happening.

A few weeks back, I showed some work I had done on the key art or cover art for Gunmetal Arcadia Zero. I’ve made a little more progress on that this week.

I hadn’t been happy with attempts to color the image digitally, but it wasn’t feeling good enough as a black and white outline, so I decided to give it a try with paint. In the worst case scenario, I figured, I could digitally remove the color and be left with a more interesting grayscale texture. 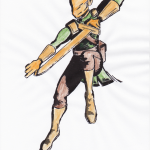 I printed out an image of the inked art I had done previously and, lacking actual watercolors, went over it with acrylics thinned with water. I used an Aquash brush which felt pretty good and matched the look and feel of the brush pen I had used previously.

Since I was using water on a sheet of plain printer paper, the sheet got a little warped and wavey, but after scanning it, I just cropped out everything outside the existing outline, desaturated the colors a bit, and overlaid it with the original art. 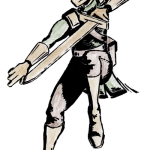 Next, I needed a background. I had the idea to do a sort of mottled wash of colors that would vaguely imply a landscape. I built up a few layers of faux watercolors, using greens and teals for the earth and purles and reds for the sky. I then worked outward from the corners with more opaque black paint to vignette the whole scene.

I got that scanned, but it wasn’t really clicking. On a whim, I inverted the image, and suddenly it made more sense. Dark teals for the sky appeared stormy and ominous. Dark reddish purples for the earth appeared blood-soaked and barren. 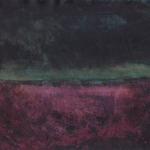 The colors in both the character and the background were a little too exaggerated, so after scanning and compositing, I brought everything closer together towards sepia tones and also added a digital vignette over everything, even the logo. 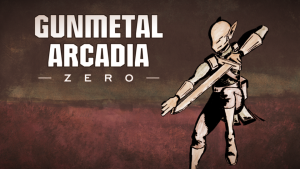 As before, I can’t say for sure whether this is the final shipping key art, but I’m pretty happy with it, and, you know, there’s not too much time left to make any more changes.

This upcoming week’s schedule is noteworthy in that Thursday’s task concludes core development of Gunmetal Arcadia Zero. There’s still some ancillary work to be done beyond that, including tuning and balancing the entire experience and adding a few features like transitioning from the final level to the ending (and figuring out what to do with the saved game after the game is finished), but there shouldn’t be any new core gameplay content coming online after that point.

What are we down to now? Three weeks? That sounds about right.