Last October, I sketched and vectorized some character art with the idea that it could maybe serve as key art or cover art for Gunmetal Arcadia Zero. But I wasn’t totally happy with the finished product; it was a little too flat and cartoony and not in keeping with the tone of the game. So last week, I drew another sketch. 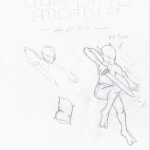 I liked the direction, but there were a number of big problems, notably the awkward twist between the torso and waist that I was having trouble resolving. I did two more versions of this pose but still couldn’t work these out. 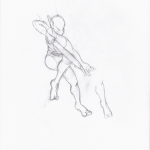 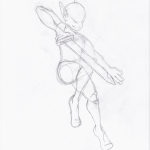 I scanned all three versions and mirrored them to get a more balanced view. I’ve found in the past that my sketches tend to lean to one side, and regularly mirroring the image while iterating helps me account for this lean. I printed out light outlines of each, and went over them again, making changes and trying variations where I could. I brought the raised knee out a little bit more, which meant figuring out how to foreshorten the leg a bit, and I tried to straighten out the lines of both arms and the sword. 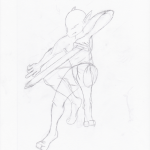 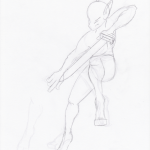 Each of these had bits and pieces that I liked, but no one was standing out as the single obvious best version, so after scanning them again, I composited elements of each into a single image, shifting and scaling limbs until things looked a little more proportional. I printed out this composite and went over it again in pencil. I was still having some trouble with the tilt of the wrist, and I made some notes here regarding how I hoped to address that. 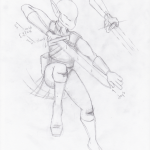 One more iteration of scanning, editing, printing, and tracing, bringing over the noted changes to the wrist and refining all the lines further. 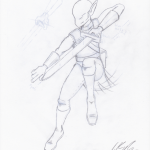 At this point, I was satisfied with the shape and ready to ink it. I had been unhappy with previous attempts to ink or vectorize drawings because of the loss of expression incurred by reducing pencil sketches to fixed-width lines, so to mitigate this, I picked up a brush pen (the fantastic Pentel pocket brush pen) and gave that a try. I did three separate versions of this, each with a few idiosyncrasies. 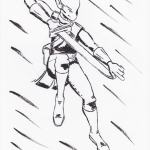 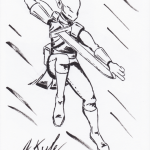 I intended to composite these after scanning as I’d done with the earlier pencil sketches, but I liked the third attempt well enough that with a few additional changes to shading, it was ready for use. 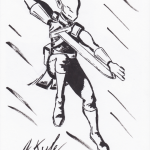 So there’s my character art. I haven’t decided yet how I’m going to use this. I tried coloring it digitally but wasn’t really happy with the results. I’ve been debating trying to do it manually in watercolor, but I haven’t picked up the art supplies yet. 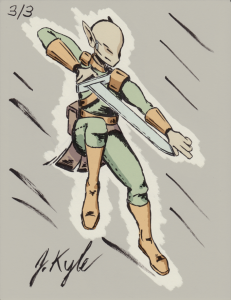 While thinking about how to lay out the logo and character for the cover, I put this together. I liked the stark contrast, but it was still a little too empty. 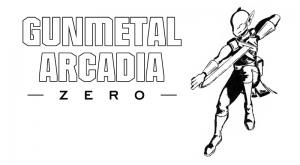 I colored the background orange to help the character and title pop a little bit more and added some subtle gradient-modulated swirls to break up the monotony. 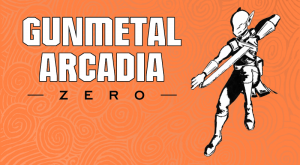 So that’s where I am right now. It doesn’t necessarily look like game cover art, but I like the way the color pops in contrast to its surroundings when I do the Steam new releases test. (This is just a photoshopped image, so don’t read anything into it.) 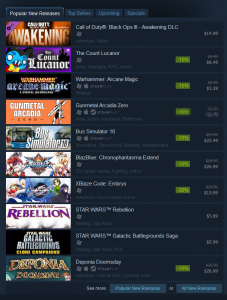 I might do a little more work on this over the next few weeks, maybe see how it looks with a proper environmental background or some monsters in the foreground. We’ll see where it goes and whether I have time to do any more work on it.

I haven’t scheduled any tasks for this weekend, as I’ll be preparing for a flight to San Francisco for GDC, which is only one week away. I will be bringing a build of the game with me, partially in case I have an opportunity to show it off to anyone, but also so I can play through my grayboxed levels a few more times and get a better sense of the complete scope of this game, because it’s still not really clear in my head, and I still have yet to decide which two levels of my eight candidates to cull.

Last-minute update: I did a few character portraits over the weekend, so I’m sneaking those into this blog post too since I’m already talking about illustrations. These will appear in the game next to dialog boxes when talking to these Apparently Important Story Characters. 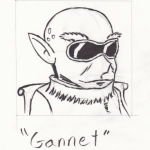 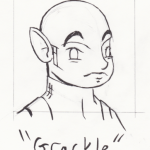 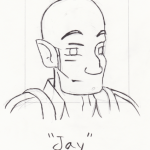 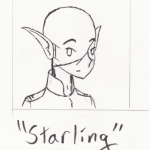 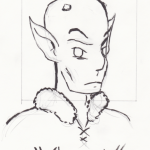 Wren is obviously the coolest kid in Arcadia. 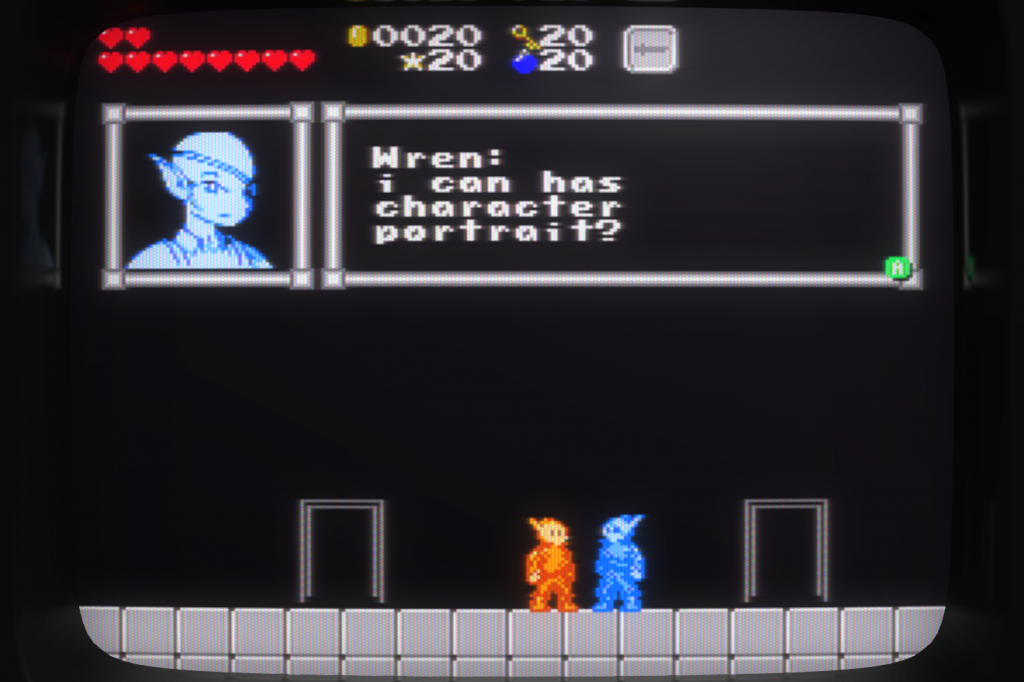