Last week, I wrote about an animation tool I had just begun developing. I’ve continued to iterate on this tool over the past week, extending its scope to encompass not only animation, but entity construction at large. Currently, it is capable of exporting animation and collision data, and I plan to continue adding specialized editor tools to handle component data as necessary throughout development.

In order to better understand my needs here, I wrote a tool to analyze every piece of entity markup from Super Win the Game and output a spreadsheet to help me identify problem areas. The best contenders for promotion to full-fledged editor features would be components that appeared very frequently or contained large amounts of markup text. I knew intuitively that animation and dialog components would meet both of these criteria, but I was curious which other elements I might have overlooked. Collision showed up very high in this profile, as did general scripting. Collision seemed closely related to animation, so it felt like an appropriate thing to tackle first. I will likely take on dialog and scripting around the same time, as those two are frequently intertwined as well. Another element I hadn’t considered prior to seeing these results was AI — in Super Win, AI was extremely simple to the point of being essentially non-existent, but what was there still showed up fairly high in the profile. My ambitions for AI in Gunmetal Arcadia are higher, so it’s likely I’ll want some custom tools for that, too.

The other half of tools work is getting the output hooked up and functioning correctly in the game. Once the editor features came online, I built a set of placeholder content to test these features and began implementing them on the game side. This included some fairly simple changes such as checking flags to indicate that an animation is intended to play not only by time but by velocity, as for a walk cycle or jump. A larger change came in the form of allowing multiple prioritized animations to run at once, where the highest priority one is seen on the screen. My hope is that this functionality will allow for more robust, expressive animations without the need for large sets of hardcoded cases and conditions.

As an example, consider the case where the player runs forward, jumps, attacks while in the air, then lands and stands still. In this case, I would loop a low priority idle animation throughout the entire process, but it would initially be trumped by a higher priority walk cycle. Upon jumping, the walk cycle would end and a jump animation would be played which would also trump the idle. The attack animation would take priority over the jump. (As an aside, the attack animation would also trigger code related to combat such as testing collision between the weapon and enemy entities. This will likely be one of my next tasks.) Finally, after the player lands and comes to a standstill, all other animations would cease and the idle loop would become the topmost item, making it visible at last. 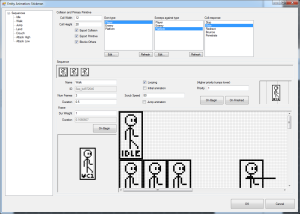 In fact, this example is exactly how my placeholder test content is working at the moment. This is exciting because it means I’m able to author animations for the player character in the editor and quickly see them in action. Historically, I’ve handled player animation separately from all other entities, because it has typically been a little more expressive, and my tools were not sufficient to meet my needs. In the Win the Game series, player animations were hardcoded (literally, in C++ code) based on a number of conditions. With the improvements I’ve been making to my tools, I’m much closer to being able to recreate that same behavior without having to write any specialized code, and that is a huge win.