Now that I’m more or less moved out of my old place, I’ve commenced regular development on Gunmetal Arcadia, starting with some of the things I perceived as particular weaknesses on Super Win the Game.

In You Have to Win the Game, I had some fairly limited rules for authoring the hazards and powerups that appear in the world. These were written in XML markup, often using hardcoded tags that the code could interpret in a few known ways. These looked something like this:

When I began working on Super Win, I wanted to move away from hardcoded rules and towards a more full-fledged method of authoring every component that describes an entity. This took the form of an entity composition tool in my editor. This tool still relied heavily on XML markup, but it gave me greater access to each component, which allowed me to create a richer set of game entities. 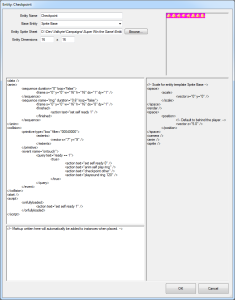 This was sufficient for shipping Super Win, but it came with its own set of difficulties. Animations in particular required some esoteric knowledge of how sprite sheets were intended to be laid out. For instance, the below example illustrates how the animation for the heart beacons that appear inside the Hollow King were written. 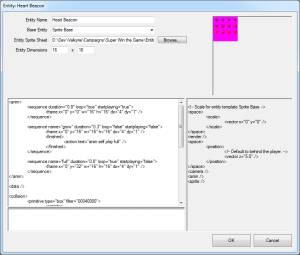 These beacons have two states (off and on), each accompanied by a looping animation, and there is also a transitional animation to go from the off state to the on state. The markup only specifies a single frame of animation for each of these sequences, but each <frame> tag contains a “dx” attribute that indicates an additional number of frames are to be added under the hood. This is convenient in that it required me to write less error-prone copy/paste markup, but it’s not exactly clear at a glance how it’s supposed to work.

Super Win also enforced a few restrictions on animated sprites that were especially annoying when I was animating the player character. The sprite’s quad were allowed to be a different size and shape than its collision box, but neither were allowed to change at runtime, and they were also required to be centered about the same point. In the below picture, the dark magenta around the sprite is the excess image data required to fill the entire quad, and the white box in the center is the collision box. Each frame of the player’s animation contains blank space beneath the feet because of this requirement. 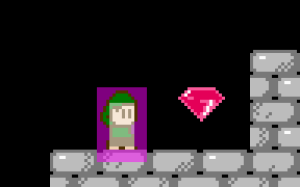 Lastly, I had no support for mirroring sprites in Super Win, so characters who could face either left or right required twice as much sprite sheet data.

I’m attempting to address all of these problems in Gunmetal Arcadia with the introduction of an animation tool. This tool allows me to visually select the region for each frame, adjust its location relative to the origin and the collision box, and preview the sequence. 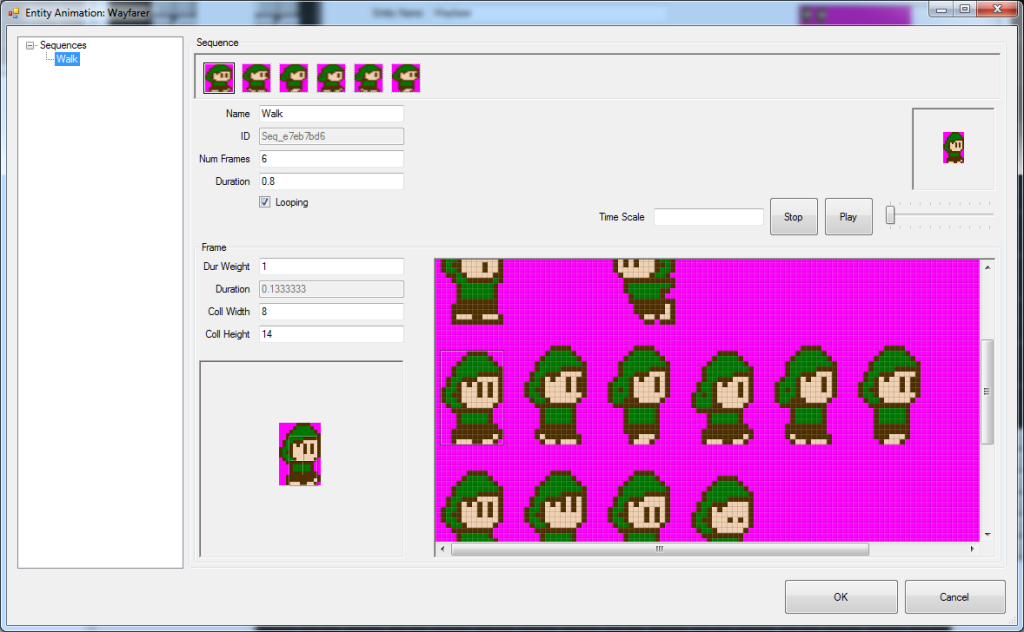 Under the hood, this tool will produce the same sort of XML markup that Super Win utilized (plus some new elements to specify offsets and such), but ideally, I should never have to think about that side of things once I start producing game content.

I’m hoping to continue improving my tools in this way across the entire development process. Animation felt like a natural place to start insofar as it would push me to break some hardcoded assumptions I’ve been making for years, but it’s easy to imagine applying the same mentality to other systems, from dialog scripting (a nightmarishly error-prone system on Super Win) to random level prefabs for Gunmetal Arcadia.