There’s a question that comes up all the time when one is presenting a new game, and it can be a surprisingly difficult one to answer: “What’s this game about?” The reason this can be such a difficult question is because it is often implicitly asking, “What is this game’s story about?” And the answer to that question is almost completely orthogonal to what I find most exciting about games.

Super Mario Bros. doesn’t have a story — when I say “story,” I’m referring to an explicit narrative, what we might think of as “plot.” Super Mario Bros. has a premise: “King Koopa has kidnapped Princess Toadstool and Mario has to save her.” But what that game is really about at any given moment is running, jumping, stomping on enemies, and avoiding hazards. Yes, the premise provides some motivation and context for the platforming action, but I’d be hard-pressed to say the game is really about its premise.

What we know of the story in Super Mario Bros., we know because we see it while playing. We know that King Koopa has imprisoned others besides the princess because we encounter them at the end of each castle. If we dig deep enough, we even find that the “King Koopas” encountered at the end of each castle are decoys, although this is never explicitly stated in the game itself.

Classic games often employ this sort of implicit narrative. Perhaps this is because gaming originated as something closer to a sport (think Pong), or perhaps it’s because the fidelity to convey more intricate narrative simply wasn’t available to early developers. Certainly the NES had its fair share of narrative-driven RPGs, and the SNES even more so, but it wasn’t until the CD-ROM era, when characters could be fully voiced, that I thnk we started seeing a trend towards the majority of games having an explicit narrative.

To be clear, I’m not saying either one of these is better than the other, but as both a gamer and a developer, the elements of games that I value the most tend to be external to explicit narrative. There are always exceptions, and I think some of my favorite moments in gaming have been when the narrative and gameplay integrate seamlessly, as in Portal‘s false ending. But if I had to pick a side, it would always be gameplay over narrative. This is perhaps obvious in the context of the Win the Game titles, particularly the first, in which only the names of rooms and occasional messages on the walls provide any sort of establishing context. I tried to inject a little bit of explicit narrative in Super Win because I felt like I had to, but I’ll be the first to admit that I’m neither interested in nor terribly capable of writing interesting characters or events. 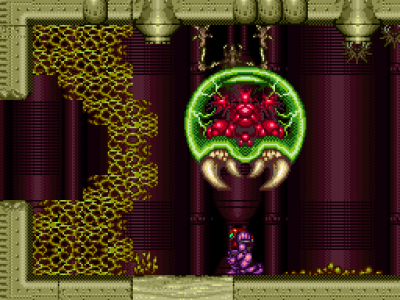 Let’s look at another example. Super Metroid has a premise: “Ridley has stolen the last Metroid and taken it back to Zebes.” That is, if memory serves, the only explicit context provided for the adventure that follows. When we encounter the remains of Mother Brain’s glass chamber, we understand very clearly that this is the same location as in the original Metroid, some years later — a great example of mise-en-something storytelling, probably. When we reach Tourian and see Metroids again, we understand that Ridley has been breeding or cloning these creatures, and we encounter one of the game’s few narrative moments, albeit one that is told without words. The baby Metroid, now mutated to monstrous size, recognizes Samus as its mother and spares her life, returning again to aid her in the final battle.

I’ll mention one last example, because it’s apparently the only game I play anymore and one that is highly relevant to Gunmetal Arcadia. The Binding of Isaac has a premise: “Isaac is hiding in the basement to escape his fanatical mother.” As in many classic games from which Isaac clearly drew influence, our protagonist does not speak, nor do we encounter any friendly speaking NPCs to give context to the environment. But where Isaac does a fantastic job of establishing its lore is in the design of its items. It would be easy to simply name items after their functional role: “damage up,” “health up,” etc. But in abstracting items from their functional use, Isaac crafts a richer and more interesting world. Isaac uses tears as a projectile weapon, so many weapon upgrades are things that might make him cry, from toothpicks to keep his eyes pried open to a torn photograph of what we may assume was his family prior to some separation. The use of pills as unidentified items (think potions in classic Rogue-likes) lends some flavor in its own right, but we when find the “Mom’s Purse” item, and it’s full of pills, that tells us something about her character as well. Isaac‘s lore is often grim, offputting, and offensive, but it’s revealed in a way that is smart and effective, and I think that’s worth celebrating. 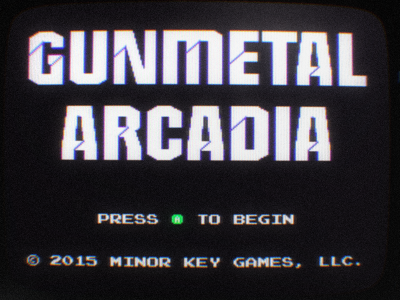 Gunmetal Arcadia has a premise: “Arcadia is being invaded by aliens, and we have to take the fight back to them.” This is just about as barebones of a premise as it gets, and it’s for that reason I find it difficult to say what the game is about. To me, it’s about 2D hack-and-slash combat in procedurally generated environments. I understand the importance of a strong premise as an emotional hook that potential players can latch on to, but I’m far more interested in building a world and developing a lore organically through the things the player encounters than I am in plotting out a narrative arc or writing robust characters.

That’s not to say I have zero vision for Gunmetal‘s world. There are some core underpinnings on which I hope to build a tangible in-game lore. The premise involves the player’s homeland being attacked by alien invaders, and my intent is that over the course of a run, the player will venture out into the wild and ultimately destroy the alien menace at its core. (And then maybe they’ll return home, just to put a nice pretty bow on the obvious hero’s journey.) But then we have to ask, what is the world of Gunmetal Arcadia about when it’s not at war? And that’s where I’m hoping to establish an interesting implicit narrative through the use of items, locations, NPCs, and so on. The world is divided into rough halves of those who favor technology and those who favor magic. These factions are not in direct conflict with each other, or at least not right at this time, but they have a tense and tenuous balance. The ongoing war provides a unifying catalyst for those who can put their differences aside, while the most zealous among each group see it as reason to cling even more rigidly to their tenets. (Putting it into writing, I realize that perhaps this sounds like a fairly on-the-nose metaphor for a real-world science-vs-religion debate, so to be clear, that’s not my intent, nor am I interested in making those kinds of statements in a video game.) What’s exciting to me about this concept is the world it will allow me to build, one in which steampunk tanks piloted by heavily armored marines can exist alongside elves and pixies and spellcasters. As I may have mentioned before, Faxanadu is my primary point of reference for Gunmetal‘s art style, and I think that sort of dark fantasy (or at least as close to dark fantasy as the NES could muster) will play well with the lore I want to build.

So, what is Gunmetal Arcadia about? Take your pick.