Bit of a short blog post this week, as I’m out of town for GDC, but I do have a sort of rambling stream of consciousness video ready to go for Wednesday. The tl;dr (tl;dw?) for that one is, “Everything’s crunchy, everything’s coming online all at once, sleep never, make game.”

Hey, that’s not a bad name for a GDC talk next year.

I’ve been doing a little more work on the shopping/economy loop. As I mentioned a week or two ago, I increased the money cap from 99 to 9999 to provide finer granularity in the value of money and items, and now I’m following up on that by creating multiple denominations of currencies. The standard gold coin I’ve been using for like a year now, that represents 1 Unit of Money. (Sidebar: I should probably figure out what the Arcadian unit of money is, huh?) Additional coins in a variety of colors now exist which values currently ranging up to 100. I’ll be doing more tweaking and tuning of these values as the game coalesces in the coming weeks and I have a better sense of its scope, but this is already feeling like it provides a more interesting, compelling sense of treasure hunting, and importantly, it means I can drop lots of coins without worrying about throwing off the economy.

Choosing colors for these coins was kind of a fun challenge. They had to be visually distinct, which meant using the entire color spectrum, and I also wanted to find an intuitive color ranking system. I wound up using sort of a hybrid of Zelda‘s rupees and the World of Warcraft rarity colors:

I’m a little concerned that orange and gold are too similar, and it would be unfortunate if you missed out on the thrill of seeing a rare coin drop because it looks too much like a common coin. The NTSC color shift in the CRT simulation does help separate these a little more clearly, though. I’m also certain there’s going to be some ambiguities for players with some forms of color blindness, but since there’s no real decisions to be made with regard to the color (i.e., it’s a coin, it has only positive benefits and will despawn if you don’t grab it quickly), I’m not too worried about it.

Gems are another form of currency. These do not immediately increase your money count, but instead go in the inventory and can be sold to vendors. Different vendors will pay different rates for different gems, so depending on your needs, you may be better off saving them until you can find a better deal. Gems are currently ranked:

Treasure chests now contain coins and gems exclusively, and I’ve been doing some work to make it easier for different loot droppers (enemies, sconces, chests, etc.) to pick and choose what types of things they drop. This addresses a problem I was feeling in the vertical slice build where treasure chests felt only marginally more valuable than the average torch or sconce.

In the future, I may also add an alternative loot dropper akin to treasure chests but that only drops hearts, as that’s beginning to feel like a much-needed resource. (I’ve also been considering healer NPCs, who would serve the same function.) 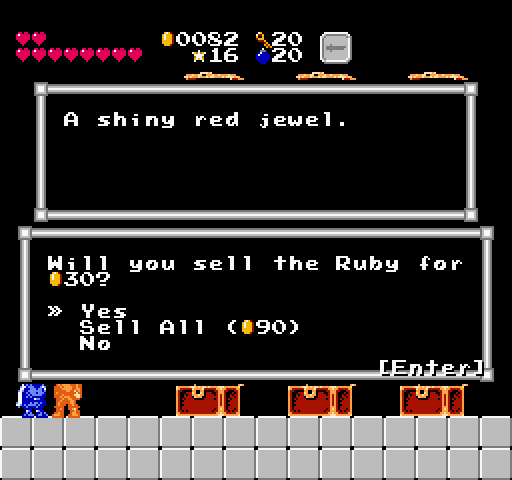 Finally, I was getting irritated with having to sell off stacks of gems one at a time, so I added a “Sell All” option. This is a little bit of a compromise between no support for selling multiple items and a full-fledged spinner for choosing a number to sell, but given my time constraints and how much of an unknown it would be to add a spinner, this felt like the most practical option. I’m also operating under the assumption that selling an entire stack is going to be the most common action. I can imagine some scenarios in which selling only part of a stack would be desirable, as in the case of consumables which serve some other purpose besides being sold for money, and maybe I’ll broach that in the roguelike Gunmetal Arcadia further on down the road.