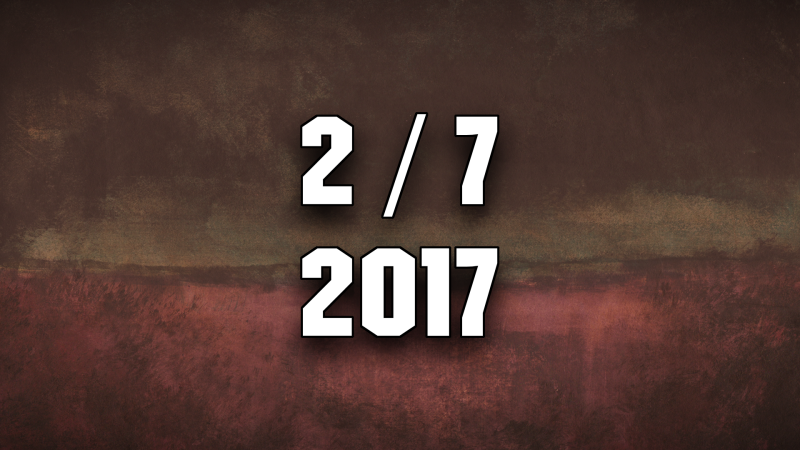 So there’s a thing. Hold me accountable, internets.

Going back to the earliest days of this project, I had originally hoped to ship Gunmetal Arcadia in Fall 2016. But that was before contract work, before Zero, before parenthood. With each of those, shipping in 2016 became a little less viable, and eventually I began to assume it would land in 2017, but until now, I hadn’t had a firm release date.

This gives me twenty-four weeks from the time of writing to finish Gunmetal Arcadia. Setting aside the last week or two for fixing bugs, finalizing builds, attending PAX South, and last-minute panic, and assuming I get four work days per week (leaving Fridays for recording and rendering a video and outlining a blog post), that’s somewhere in the realm of ninety days remaining.

Tracking tasks per day this far out would be a pointless effort, because my predictions are consistently inaccurate in either direction and the landscape still uncertain in parts. But I do have a rough roadmap of everything that needs to be done by launch, and at a weekly granularity, things start to make a little more sense. So I’ve started putting together a tentative weekly schedule that gets me to launch by the end of January, and I’ll be revising it as the path becomes clearer.

This also marks a change in the direction I’ll be going with these blog posts. As I’m starting to exhaust the number of new features that I can mine for technical blogs, and as the video series is serving as a general “here’s-what-I’ve-been-up-to-recently” dev diary, I’ve been unsure of where to take the blog. (This happened in the final weeks and months of Zero‘s development as well). So what I’m going to start doing instead is using the blog to talk in high-level terms about my design goals for the coming week. In this way, I think the blog and the video should serve as nice bookends to each week, with the one defining some goals and projections and the other revealing how things actually turned out.

So, in that spirit, here’s what I’m looking at for this week. After finalizing the first draft of the roadmap and cleaning out my inbox of notes to myself about future tasks, I’m going to start working on some real, non-placeholder, actually-for-shipping level prefabs. (I’ll probably stream this, too, since I’m due for a stream sometime this month, although this post likely won’t go up until afterwards.) This will be informed by the stats gathering work I did a few weeks back, and as this also necessarily implies that level generation needs to be as close to being believably locked down as possible, I’ll probably spend a little time upfront making some last minute changes to generation.

For starters, I currently have an issue where doors can only appear on the bottom floor of a room. I’ve been meaning to address that for a while and keep forgetting because it isn’t always apparent as a bug unless you’re specifically aware of and looking for it. The other issue is boss rooms: these likely need to be prescribed and possibly associated 1:1 with the individual boss who will appear in that room. At minimum, they must not be constructed in such a way that the boss does not have a place to spawn, as has been happening in the last week or two since I added bosses.

If I have time, I’d also like to take on some cosmetic changes to levels, adding the skull-and-crossbones icons and vertical lines outside boss rooms, and maybe finding a better solution for “optionally solid” tiles set against various types of backgrounds, as discussed in a recent video.

It’s worth pointing out that I haven’t announced a date for the wide release of Gunmetal Arcadia Zero yet, and I won’t — it’ll show up when it shows up (but it will be before the end of the year).