I forgot to account for Easter Sunday when I scheduled my tasks, so I’ve lost a day. It’s not a huge concern as I was ahead of schedule in other regards (notably the soundtrack, character portraits, and key art), and I’d prefer to start the process of decorating and populating each level on a weekday anyway. This is going to be the last big content creation sprint on Gunmetal Arcadia Zero and it demands my complete attention. This is the phase of development that will define the experience. All the systems and features I’ve spent the last eighteen months building won’t mean a thing if this content doesn’t put it to the best possible use.

I’ve been using this expression “additional work as time allows” in my posted schedules recently, and I think it’s worth talking about what that means. I’ve reached that point where the work that I’m actually doing on any given day is only partially informed by the daily task list I’ve been maintaining. That’s not to say the scheduled work isn’t getting finished too, at least in some fashion, but a majority of my time is being spent putting out fires and addressing longstanding bugs and polish issues that I absolutely have to tackle before shipping.

Some examples of these sorts of issues include:

I’m slowly starting to get the shopping loop in place, and I’ll be showing a little bit more of that in Wednesday’s video, but it’s feeling like that’s going to be a balancing act all the way to launch. It’s a weird thing where I feel like maybe I’ve invested a little too heavily in RPG-like mechanics for a game that’s not deep enough to warrant them. I won’t really know for sure until I have the entire game built out and can play through it start to finish and understand its scope fully.

I’ve reached the stage of development where I start questioning and doubting everything I do, and now you can too! :D

With only a few weeks of development left on Gunmetal Arcadia Zero, it’s very late in the game to be doing editor tasks, but as I’ve been spending more time using the editor recently and working with entity markup in particular, it’s become worthwhile to improve my ability to search all markup. 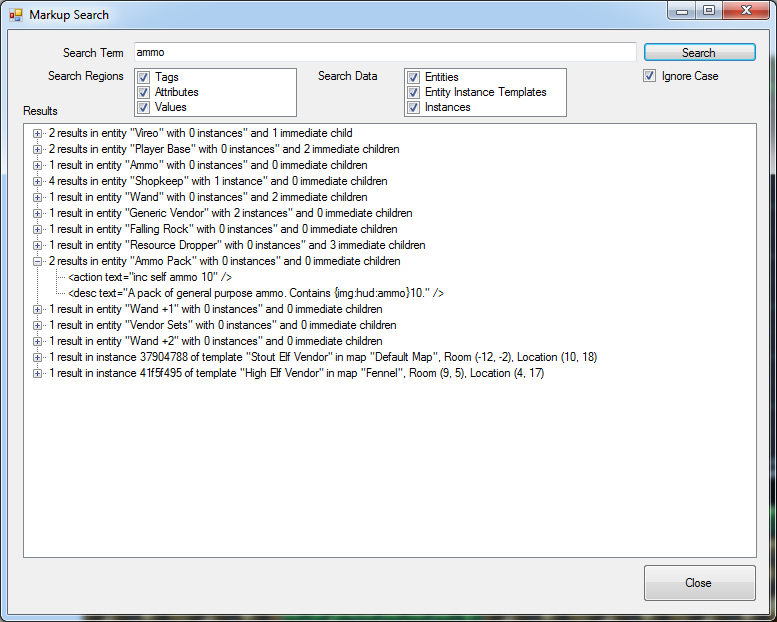 This new editor dialog allows me to search any markup in the game that may exist in entity templates or instantiated entities, and to search by tag, attribute name, or attribute value. This has already proven to be extremely useful in tracking down old and deprecated data, and I can imagine it will become even more valuable in the future as the scope of my content grows for the roguelike Gunmetal Arcadia.