As I mentioned in the previous blog post, I spent last week out in San Francisco for GDC and therefore don’t have a development update this week, and I won’t have a new video on Wednesday. But I did want to write up some thoughts about this year’s event and post the development schedule for the next few days. 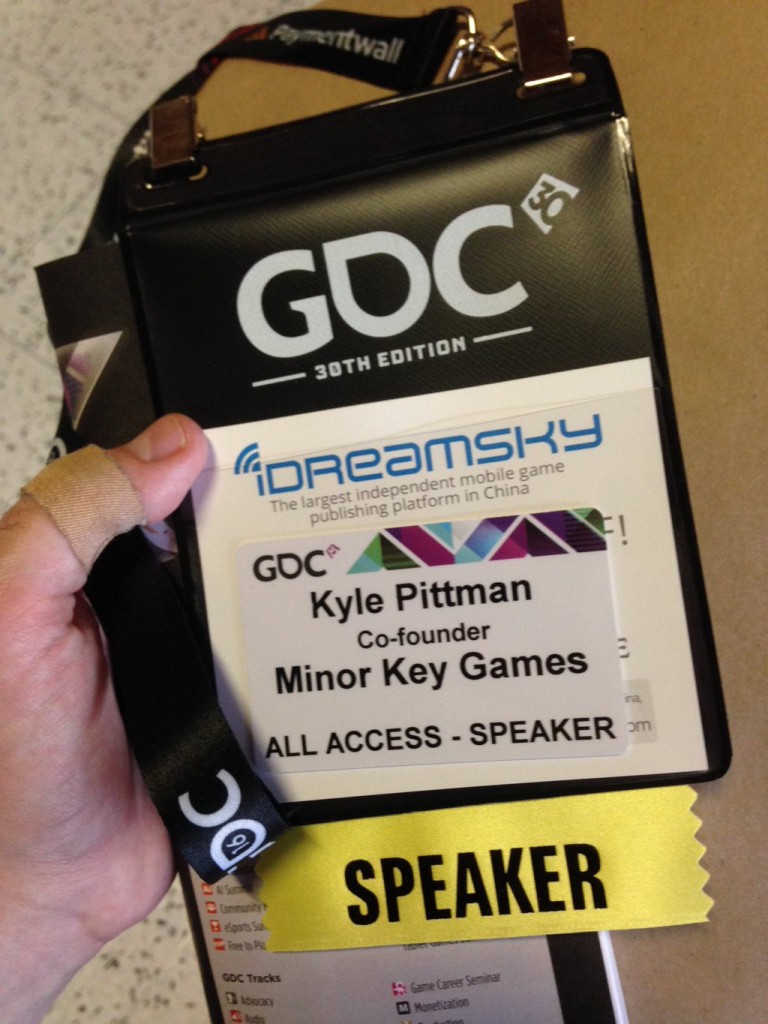 This was my third visit to GDC, my second as both a full-time developer and an indie developer, and my first time speaking. So there’s a life goal Achievement Unlocked. I gave a talk first thing Monday morning as part of the Math for Game Programmers tutorial. It was called “Building a Better Jump,” and it was the final form of a blog post that I drafted years and years ago on my old personal blog.

My slides should be up on essentialmath.com shortly, and I’ve already temporarily uploaded them (along with annotations of a rough transcript of my actual talk from memory) here:
PowerPoint Slides
PDF (no annotations) 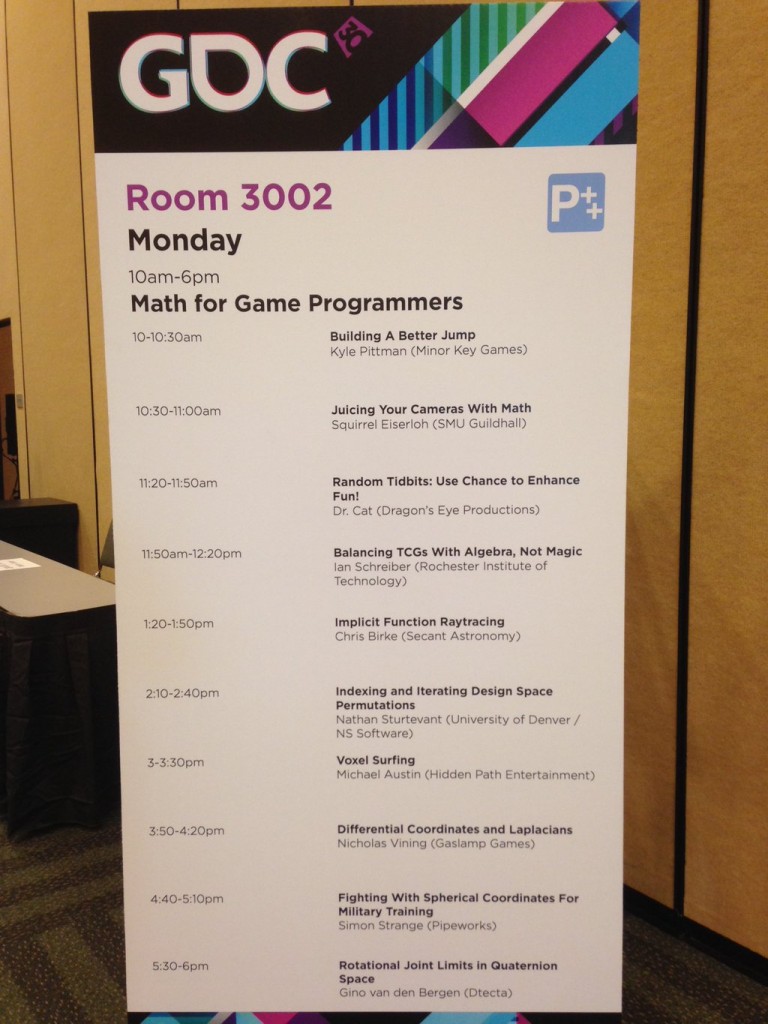 This was by far the largest and most visible talk I’ve ever given (and it will be even more so in another month or two when it hits the GDC Vault), and I feel like it went pretty well. I thought I’d be super  nervous, hands shaking, voice cracking and all that, and I really wasn’t. Part of this might have been avoiding caffeine before I spoke, part of it might’ve been the Xanax I took when I woke up, but I also wonder if spending the last few months talking to a camera weekly has helped in that regard. It’s not the same thing as a real audience, but it’s definitely helped me improve the way I think as I speak in order to predict what I’m going to say next and account for any mistakes or omissions in real time. Also I rehearsed the heck out of this thing, so there’s that.

For the last few years, GDC speakers have received a deck of playing cards featuring the top speakers from the previous year. So that’s my new life goal, I guess: make the GDC speaker deck. Send in those evals if you were there!

This was the first year I had a GDC pass that wasn’t just an expo pass and would get me into talks, so naturally I spent most of the week doing just that. The highlights of my week were the Indie Soapbox, #1ReasonToBe, and the GDC Microtalks. Each of these consisted of a number of short talks from a diverse panel of speakers, and each was a great experience in its own right. I don’t know whether these will be released as free content when this year’s talks hit the GDC Vault, but when and if they do become available, I’d encourage everyone to check them out.

I’ve seen a lot of game developers talking about impostor syndrome recently. But I don’t usually experience myself, at least not the way it’s described. Tommy Refenes gave a short talk about impostor syndrome during this year’s Indie Soapbox which opened with a similar sentiment. And by the end of the week, I could commiserate. I’m confident in my abilities as a moderately isolated indie developer. I can make cool things that I believe in. But selling them is another matter, one in which I’m actively growing but still far from proficient, and meeting people in person at an event like GDC, especially people I follow and have maybe spoken to on Twitter…well, that’s where I hit the wall that is impostor syndrome, I guess. I had an experience multiple times this week (and probably a few times last year as well, though I might’ve suppressed the memory), where I met someone, exchanged words briefly, and only much later realized that I had been talking to someone I knew through the internet and held in some esteem. That’s…pretty embarrassing.

I’m becoming increasingly conscious of the fact that the roguelike Gunmetal Arcadia, historically the definitive eponymous Gunmetal Arcadia, the game I’ve been developing and trumpeting for a year and a half now, it might need a subtitle. That’s weird.

My intent was that Gunmetal Arcadia Zero would be a prequel that would ship ahead of the flagship game and establish the game mechanics and world, and it’s still in a good place to do that. But I’m finding that it’s sounding more and more ambiguous to my own ears which game I’m referring to when I just say “Gunmetal Arcadia.” I can’t count how many times I’ve prefaced it with “the roguelike” as I just did in the preceding paragraph. And that represents a failure in branding.

I don’t yet know what this subtitle would be. It would need to still communicate this aspect of being the definitive experience so as to not be perceived as a sequel to Zero specifically, which is a smaller game (and importantly, a cheaper game). I’ll sleep on that one for a while. It’s entirely possible by the time that game launches, it’ll be a non-issue, but it’s something that’s been on my mind recently, and I felt like it was worth talking about.

As I’ve said, there’s not going to be a new episode of Let’s Make Gunmetal Arcadia this week since the pre-recorded one went out while I was away at GDC, but I’ll be picking that up again next week.

I have about six weeks left to finish this game. Let’s do this.